For people living in conflict zones, the pandemic spread of coronavirus disease (also known as COVID-19) represents a dramatic threat to life. Health systems are ravaged by war, and it could be difficult for people in these areas to prioritize actions related to the coronavirus COVID-19 as there could be many other more immediate threats to life, such as gunfire, shelling and bombings or lack of life-saving health care for other medical needs.

VACCINATION IN EMERGENCY SETTINGS: JOINT NOTE FROM ICRC, IFRC AND WHO

“This joint note acts as a reminder to integrate protection thinking into vaccination work and proposes some concrete actions based on existing recommendations and good practices.”

the International Committee of the Red Cross (ICRC), the International Federation of Red Cross and Red Crescent Societies (IFRC) and the World Health Organization (WHO) have joined hands to offer support to national authorities, health and humanitarian organizations. The newly published JOIN NOTE brings forward pragmatic guidance in mitigating risks that might be observed in some areas where vaccinations teams are deployed.

The Safer COVID-19 Response Checklist was developed for managers of health-care services, individual practitioners and health policymakers worried about the impact of violence against health-care workers, facilities and patients during the COVID-19 response.

It provides a practical summary of measures that can be implemented in healthcare facilities and services, to prevent, reduce and mitigate effects of violence against health-care workers and patients during the COVID-19 response. It also contains a series of online references to help understand and implement these measures. This checklist aims to encourage local risk assessment, monitoring of incidents, accountability and transparency towards those receiving care as a means of preventing violence against health-care workers and services. We aim to protect health-care workers’ well-being and ensure that they apply the ethical principles of health care. 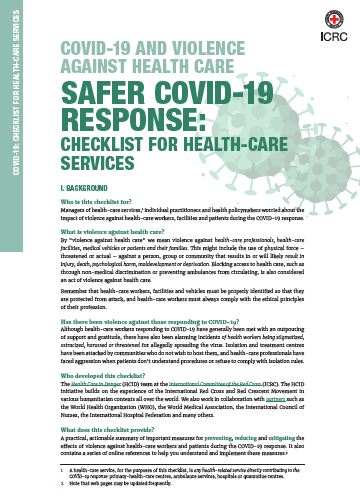 Violence against healthcare is never acceptable.

Let us know if you have feedback about this tool!

NEW PATTERNS OF VIOLENCE AGAINST HEALTHCARE IN THE COVID-19 PANDEMIC

The International Council of Nurses has spoken out

Nurses and other health care workers on the frontlines of the fight against COVID-19 deserve to be recognized and commended for their life-saving efforts and personal sacrifices amid increased medical risk – and in some places amid ostracization, harassment and attack. “ “Stigmatization and violence against nurses and other health workers in some countries is shocking; the only response is zero-tolerance,” said International Council of Nurses President Annette Kennedy

New patterns of violence against healthcare in the covid-19 pandemic

‘Please, don’t tell anyone!’: healthcare stigma in the COVID-19 era 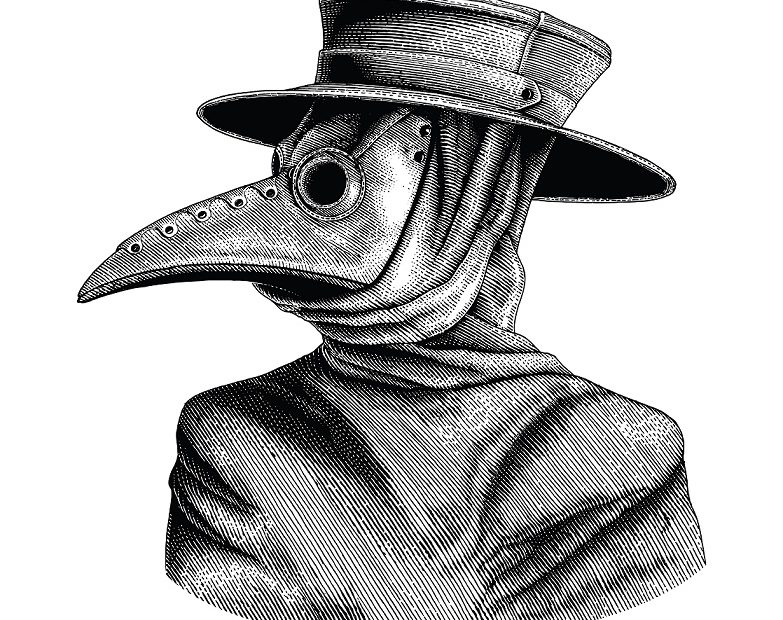 Since the onset of the COVID-19 pandemic, healthcare workers in conflict zones and peaceful countries alike have faced countless challenges, including shortages of protective equipment and insufficient protocol to treat the new virus. Some doctors, nurses, ambulance drivers and other healthcare professionals have experienced stigmatization within their own communities, triggered by an intense anguish and an often-disproportionate fear of infection. As a result, not only are those affected by COVID-19 blamed as ‘plague spreaders’, but the healthcare staff providing for them also face discrimination.In this post, ICRC Health Care in Danger delegate Paola Forgione reflects on the role that society plays in either supporting or stigmatizing people affected by the virus and healthcare workers, based on her professional research as well as her own personal and recent experience as a COVID-19 patient

Paola Forgione has worked with the ICRC for six years, carrying out missions in Ivory Coast, Zimbabwe, El Salvador, the Gaza Strip and France, before joining the Healthcare in Danger team at the ICRC Headquarters in Geneva in July 2019. Since the pandemic outbreak, she has been researching the new trends of violence against healthcare triggered by the COVID-19 crisis. She holds a PhD in International Justice and Human Rights from the University of Pavia in Italy. 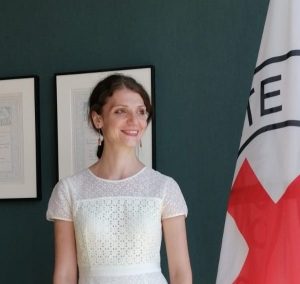 ICRC: From February to December 2020, 848 incidents of violence against health care were gathered from 42 ICRC delegations.

violent incidents recorded against health care providers, due to COVID-19 in 42 countries.

%   deliberate failure to provide, or denial of assistance.

Among the incidents of violence perpetrated against a person, 72% of incidents targeted health care personnel, 21% targeted the wounded and the sick (including patients suspected of COVID-19 and seeking care), and in a small proportion IDPs or Refugees (3%) were the people affected, among others.

When the incident involved an object, 49% targeted a facility (41% a health facility and 8% a quarantine/isolation facility), and 43% targeted a medical transport (includes ambulances and vehicles transporting medical supplies), among others. In overall, 39% of the incidents were perpetrated by the community or civilians, 21% by the patients or their relatives, 20% a State Authority and 11% health authorities such as hospital administrators and health personnel. Armed groups accounted for 6% of the incidents reported.

The ICRC has been carrying out continuous efforts to support healthcare workers around the globe, offering free guidance to a C-19 response free from violence. More than 1 million health workers have been sensitized through videos in social media, and the Checklist for a Safer C-19 response has been downloaded by over 6,000 health workers. (see above section)